Dermascope Magazine has been a major skin care magazine for the past 40 years. It was established as the first skin care journal in the United States of America in the year 1972 and it has certainly come a long way from its humble origins. The magazine offers its readers with a 130+ page full color magazine that is full of exciting information of all things to do with skin care. It was published as a quarterly magazine until the year 1982, after which it emerged as a bi-monthly publication. The magazine became a monthly magazine by the year 2000. This increase in the number of issues was largely because of the aggressive marketing undertaken by the magazine in order to meet the needs and requirements of its loyal readership. 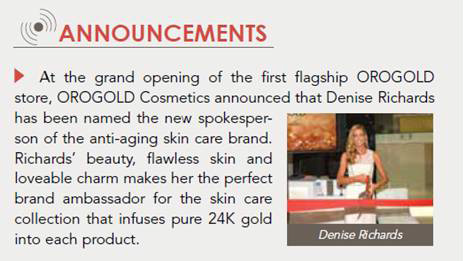 Dermascope likes to term itself as the “The Encyclopedia of Aesthetics & Spa Therapy”, and rightly so. It reflects the expansion of the skin care industry in the US and it has also played a significant role in popularizing skin care all over the country. In fact, the careers of numerous leaders of the skin care industry are closely intertwined with Dermascope and its issues can be found on the shelves of estheticians all over the world.

Dermascope decided to feature the launch of our flagship OROGOLD store in its November 2013 issue. This announcement was made in the “Take Note” section on page 14 of the magazine under the Announcements section. The magazine spoke about the launch of our store and about why Denise Richards was the ideal choice for being OROGOLD’s brand ambassador.

We completely agree with Dermascope that Denise’s loveable charm, flawless skin and exotic beauty makes her an ideal brand ambassador, but we are also thankful to Denise for all that she has done for the brand as our brand ambassador. OROGOLD Cosmetics would also like to take this opportunity to thank our friends at Dermascope for featuring the launch of our store in their esteemed magazine.

Vogue, a luxury lifestyle magazine that is published in 23 unique national and regional editions, really doesn’t need any introduction. The magazine dates back to…